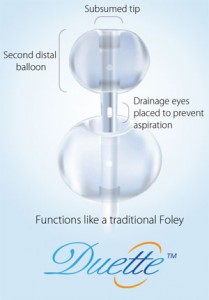 I recently wrote a post about the call for a replacement for the Foley catheter, which has been around for 76 years and used virtually unchanged since then. Dr. Roger Feneley narrated the video in that post that showed the kind of damage a Foley can do to the bladder wall – uggh! See that post and video here: Indwelling Foley Catheters Becoming A Thing Of The Past?

Dr. Bruce Wiita, a Board Certified Urologist who has been practicing for 45 years, has invented what could (should) be a much better and safer alternative to the Foley for long-term indwelling catheterization. It’s called the Duette ™ by Poiesis Medical. The major difference is the second balloon at the tip, which makes it less “pokey” so it doesn’t stick into the bladder wall, which the Foley often does (watch the video). The other difference is that the drainage hole is between the two balloons, which prevents “aspiration,” which basically means the tissues of the bladder wall don’t get sucked into the holes (again, watch the video). these things reduce the chances of CAUTI (catheter induced UTI), and other damage to the bladder.

Also, the Douette operates just like the traditional Foley as far as inserting and inflating, so very little, if any, additional training would be required of medical workers.

Where and when the Douette will begin appearing in hospitals and medical supply stores I don’t know. But hopefully it will be soon. I’m sure I am not alone wanting to replace my indwelling Foley catheter. I’ve been lucky with the whole not-getting-a-UTI thing so far (only one). But my bladder is very inflamed, as evidenced by the extreme pain I feel by just having my catheter changed. I’m betting a Douette would help that.

You can order from the below link (if in the US):

they are about $17. Of course, if you can get them from your insurance company or urologist/doctor, you’ll save some money.