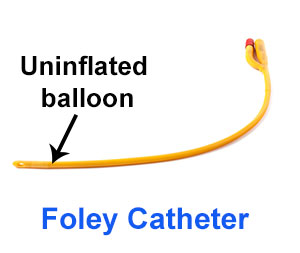 Believe it or not, there are lots of different kinds of urinary catheters. So the question “what is a Foley Catheter?” is not necessarily as easy to answer as you might think.

Let’s start with what a catheter is. A catheter is a tube that is inserted somewhere into the body to allow fluid to flow out of the body.

One of the most common uses for that is to allow pee (urine) to flow out of the body. You would want this if there is any kind of blockage in the “normal” route that pee takes to exit your body. Or there might be a need to bypass the normal route due to some other cause, like surgery.

So what is a Foley catheter already?

A urinary catheter that stays in the bladder for longer than just a few minutes is usually called an “indwelling” catheter. That’s because – well, it dwells in the catheter, rather than just being put in to drain pee and taken out again.

How does a catheter stay in the bladder?

Good question. There are a couple of different ways a catheter can be held in place. But the most common type is the Foley catheter, which is held in place by a balloon. 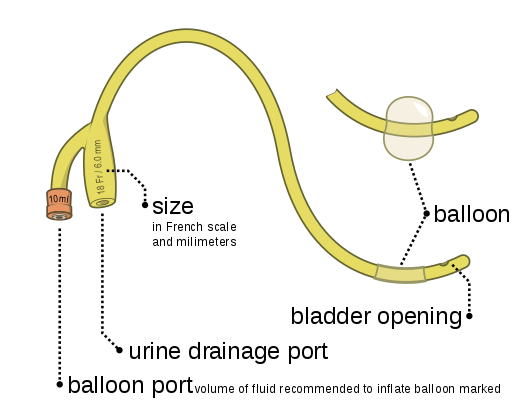 At the far end of the balloon is the end of the tube (that doesn’t inflate), and it has holes in it. The pee in the bladder goes into those holes and comes down through the catheter tube and out the end outside the body, which has a drainage bag attached to it. Then of course, you empty the drainage bag into the toilet several times a day instead of “going pee” the normal way.

Another kind of indwelling catheter is a “pigtail” catheter. That was what kind I initially had. Instead of a balloon to hold it in place, the part of the tube that goes into the bladder curls up into a coil (like a pig’s tail), and that keeps it from coming out of the bladder easily. However, since the tube could still be pulled out, uncoiling the end, it is usually further secured with some stitches, in the case of a suprapubic insertion (goes in through the abdominal wall instead of up the urethra). See my post What Is A Suprapubic Catheter? for more on that.

So a Pigtail catheter is not a Foley catheter?

Yes. That is correct. A pigtail catheter is NOT a Foley.

What makes a Foley a Foley is the single balloon holding it in place. Also, a Foley catheter has two different channels running along its length that lead to two different outlets/ports that hang outside the body.

One of those channels only goes to the balloon, so it can be inflated and deflated by syringe. The other channel is, of course, how the pee comes out of the body.

Hopefully that answers the question “what is a Foley catheter?”