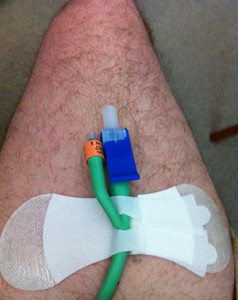 [Update: Before trying this, ASK YOUR DOCTOR about it! It turned out that though one of my urologists said it was fine, my actual surgeon for my upcoming urethroplasty was upset about it. He said this is allowing my bladder to start putting pressure down the urethra again, which is NOT what he wanted. My urethral stricture was supposed to be free from any pressure prior to the surgery. Oops. So make sure you get cleared to do this before trying it!]

Here is what I originally wrote:

I wear a catheter valve instead of a leg bag now. I recently posted about being allowed to finally stop wearing a leg bag (attached to my suprapubic catheter) during the day. For more, see that post here – I Haven’t Really Need This Leg Bag! It was necessary for my bladder to “rest” for 3 months, the doctors tell me, to be able to accurately accomplish the combined antegrade and retrograde urethrogram (which my doctor calls an “up-down-ogram”) to pinpoint the size and location of my urethral stricture. They stick a scope through your suprapubic opening, through the bladder, and down into your urethra while simultaneously sticking a scope up your “willie.” Yeah, I had to be under anesthetic for that. I let them talk me into a spinal, which I will not be doing ever again, thank you very much. But I digress. 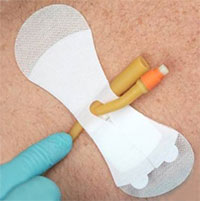 Anyway, now that the scoping is done, I wear no leg bag during the day. Instead I simply stick a plastic flip-handled valve (pulled off the bottom of a Hollister Leg Bag – see picture on left) into the end of the Foley catheter, which is secured to my thigh with a GRIP-LOK Large Foley Securement Device (see picture on the right). This is incredibly liberating in that you don’t have the cumbersome bag strapped to your leg that you have to cover up if you go out.

I specified that I don’t wear a bag “during the day.” That’s because my bladder has completely forgotten how to do its job of filling and emptying over its 3-month vacation. So I have to go to bathroom to pee (by opening the valve) like every hour. For most normal people, it’s every 4 hours or so. So one downside is having to retrain my bladder, which requires me to “hold it” when I get that urge. I do the “wee-wee dance” for as long as I can tolerate it, then I go. I’m very thankful that I still can attach a bag right now, though. At night I attach the bedside bag, which prevents me having to get up every hour. And if I go to a movie, I can stick the leg bag on so I don’t have to leave the theater multiple times per film.

I really hope that by the time they fix my stricture and remove all my catheters (this should be mid-August of 2013), my bladder has gotten back to normal. Otherwise I’ll be getting up a lot at night and in movie theaters.

How often does the valve need to be changed?

So those are some of the ups and downs of this alternative way of dealing with a suprapubic catheter. Of course this is also an option with a catheter inserted the traditional way. But I started wondering about how often the valve should be changed to reduce the chances of a UTI. Apparently it is not possible to sterilize plastic after it has been used in a catheter for a certain amount of time, where it is exposed to the colonized bacteria present in all indwelling catheters. At least I have not found any evidence or been told of a way. It seems to me that sticking it in a microwave oven for 60 seconds should do the trick, but I have NOT asked my doctor about that yet. What I DID find was site after site advising that you change a catheter valve every 5-to-7 days. Doh! I’ve been using this one for like 3 weeks (and that was AFTER having it on my leg bag for several days). So today, I went into my stash to my last new (in the package) leg bag and pulled the valve out of it so I could replace the original one.

As with so many things involving living with a catheter, I’m finding good, evidence-based information hard to find. So I promise that as soon as I find some more decent info on valves, how often they should be replaced, and whether or not they can be sterilized and re-used, I’ll post it here! In the mean time, I advise that you play it safe and change your valve every week.

I found a couple of sources on line. You can try the tru-flo valve (www.truflovalve.com), which costs $16. Or you can order an entire leg bag and just remove the valve and use that. I use the valve on the Hollister Leg Bag. There is also the Bard Flip-Flo valve, also which you can only get along with the bag – their Dispoz-a-Bag. Both the Hollister and Bard bags cost only about $10. So I don’t know why you’d order a $16 valve when you can buy bag-and-valve for $10. But maybe the tru-flo provides something special. I ordered one, so I’ll let you know when it arrives.

Update: It might be a personal thing, but I did not like the tru-flo. It requires you to pull the cap AWAY from you to open it, which it the direction that pulls it out of the tube. Yes, you are supposed to be able to hold onto the base (the part plugged into the tube) to keep it in while you pull the thing open, but it was not easy to open and I ended up pulling it out more often than not. I cannot recommend this one. My best result was still with the cap pulled out of a Hollister bag.

So if you’re looking for an alternative to wearing a bag all the time, as well as allowing your bladder to keep working and practicing, you might consider asking your doctor about using a valve instead.