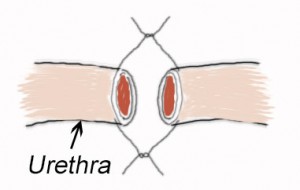 There are several possible treatments for a stricture of the urethra (a blockage), each one more gruesome than the last. It seems amazing that something as seemingly innocuous as a bit of scar tissue the size of a Tic-Tac can cause so much pain and damage, and be so difficult to repair. My urologist said that only cancer is harder to fix.

The reason for all the trouble caused by a little flap of skin is due to its location – obviously the urethra, which is the tube we pee (and ejaculate) out of. So the urethra is pretty darned vital in our daily lives. If a pesky bit of scar tissue decides to grow inside it, we start to have difficulty peeing. Eventually it becomes impossible to pee enough to empty our bladders, and THAT is where the danger starts.

When our bladders cannot drain, all kinds of nastiness can ensue, such as acute pain, bladder stones, infection, bladder damage, kidney failure, and even heart attack. Usually folks get to a doctor before most of those symptoms can occur. The pain of not being able to go wee-wee is a pretty good motivator.

But the problem then is that the first thing the docs have to do is put a catheter into your urethra to drain it. If they think you have a stricture, they’ll put a camera up your “wee-pipe” (sorry guys, I know you’re cringing right now) to confirm it. Then you get to sport a long-term catheter in your bladder – called an in-dwelling catheter. If they can’t get a catheter up the normal way (yeah, you know what I mean), they’ll put a suprapubic catheter in. That’s the one they poke through your gut into your bladder. That’s what I have. Yay.

So what are the treatments for a urethral stricture?

The One That Isn’t REALLY a Treatment

Urethral dilation is often done and never works, at least not for very long. It has a zero percent long-term success rate. It is pretty much what it sounds like – they stick tools up the willie to stretch it out. It does nothing to the stricture itself, which remains in the urethra and still hurts when pee rushes by. Unless you know you only have a week to live and have no access to a catheter or other medical care (sadly, the latter is the case in parts of the world), don’t bother with this painful non-treatment.

The One That Sort Of Works Sometimes

A urethrotomy is something that you’d think would be the best and least invasive, most effective fix. They just put a scope with a tiny knife at the end of it (cystoscope) directly up the wee-wee, and cut the offending tissue off the urethra. We call it the roto-rooter technique. But it turns out that urethrotomy has a pretty poor success rate, only 30 to 50 percent (depending on the different studies). That means that for at LEAST half of everyone who has a urethrotomy, the stricture will grow back. So that leaves us with the class of treatments that have over a 90 percent effectiveness, the urethroplasty.

The One That Works and Lasts

Urethroplasty is actually a class of surgeries, all of which involve open surgery to reconstruct the urethra after cutting out the part that has the stricture on it.” So to say “the one that works” basically means any of the varieties of urethroplasty will be a more effective and longer lasting stricture treatment (though there is only sketchy data on the 2-stage version due to the fact that there are so many variations on how it is done).

There are several types of urethroplasty.

End-to-End – The end-to-end (technically “end-to-end anastomosis”) is perhaps the simplest of the urethroplasties, mainly because it does not require a graft from elsewhere in the body. the surgeon simply opens you up “down there” (as with all urethroplasties), cuts out the entire section of the urethra containing the stricture, and joins the remaining two ends together.  Obviously this can only be done with very short strictures (usually less than 2 centimeters). Otherwise, you’d stretch the urethra too far and cause things like penile curvature or other erectile disfunction.

Buccal Mucosal Onlay Graft (BMG) – This one involves taking some tissue from inside your cheek (buccal) and using it as a graft. The surgeon makes an incision along the urethra where the stricture is. The incision makes the diameter of urethra wider when they pull it outwards, widening the opening.  But this obviously leaves a hole in the urethra. The graft is then laid over the hole like a patch, and you have a much wider urethra there, allowing normal flow of urine. Sometimes other types of tissue are used for the graft, like a flap of penile skin or lately, even synthetic tissue.

2-Stage – In the most severe cases, a 2-staged operation is used. There are several varieties and methods, but basically this means that either buccal tissue or penile/scrotal skin, or both, are placed into the underside of the inside of the penis and left to heal (after they close up the penis) for about 6 months. During this time the patient will either urinate through an indwelling catheter, or through a new opening that may be created behind the scrotum (shudder). After those months have passed, they open you up again and roll the grafted tissue into a new urethra. I would not be surprised to see this procedure be modified by the creation of a new urethra via 3-D printer. The technology exists as of 2013 to use biological material with living cells in a 3-D printer to “print” body parts. See the following link for more on that. https://news.discovery.com/tech/biotechnology/artificial-ear-looks-acts-like-real-thing-130221.htm

So that basically covers all the treatments for a stricture of the urethra. They tell me I will have the end-to-end version. I’ll report back when I know for sure.