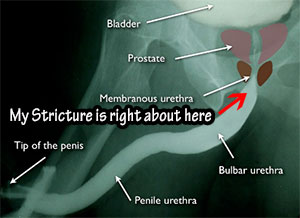 I recently had diagnostic surgery to pinpoint the length and location of my urethral stricture. I wrote about that procedure here – Results Of My Combined Antegrade And Retrograde Urethrogram. My urologists have taken to calling this an “up-downogram.”

Anyway, today I saw the doctor, who showed me the image of the stricture. It’s in the area called the bulbar-membranous urethra. It’s sort of right where the bulbous area ends and the membranous area begins. See the picture to the left, which IS NOT a pic of me, BTW. Basically that means it’s not really in the “wee-wee” at all, but just below the prostate. That means that the “fix” surgery, which will be an end-to-end anastomosis (a type of urethroplasty), will not require the docs to  – guys, you might as well cringe now – slice open my “little fella.” Instead, they will go in via the perineum.

So though it may be a bit painful to sit down for awhile after the surgery – which they scheduled today for about 6 weeks from now – it makes me feel a bit better about things. It isn’t logical. It’s just as cringe-worthy to talk about cutting into what amounts to “the taint.” But it is what it is.

I continue to be amazed at how much trouble can be caused by a little bit of scar tissue about the size of the head of a pin, or a grain of rice, or something else really small like that.

Today was another step forward in this whole journey. And I still have no idea what caused the stricture. That’s life, I guess.