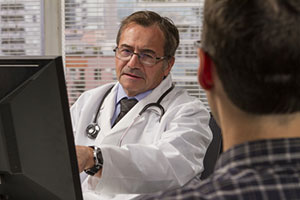 Somebody recently asked, in the comments section of another post, what questions to ask his doctor prior to his upcoming urethroplasty to fix a stricture of the urethra. I’ve had a long time to think about what I would have been better off knowing if I’d been more prepared for my own surgery almost one year ago (I’m doing great, BTW:)).

First of all, I had to verify with him that he was having the same type of urethroplasty as I had – end-to-end anastomosis. This is performed by approaching the urethra NOT from the penis, but from the perineum (area between the back of the scrotum and the anus). The surgeon cuts up through the soft tissue to access the area of the urethra containing the scar tissue that makes up the stricture. The it’s just a matter of cutting that section of the urethra/tube, and then sewing the two healthy ends together.

He was scheduled for the end-to-end, so I gave him a few questions to ask that would give him the answers I either wish I had or found useful because I DID.

First I suggested he ask about how he should sit down after the surgery. I was sent hoe with a an inflatable donut-shaped pillow. And that helped me sit with less pain, especially if I was lying back in my recliner chair. But I used that donut pillow for too long. Nobody told me that I SHOULDN’T use it, or that at least I should not use it for very long. I ended up extending the pain because things were hanging down in the center of the pillow that would have been much better off supported by sitting on a standard soft cushion. Then the longer I wore it, I felt a painful pressure up my rear end. I assumed it was swelling from the surgery, but it was – as hard as this was to believe – an extreme hemorrhoid problem.

Also, it would be a good idea to find out from the surgeon how long the healing should take. Be prepared for it to be a really long time My doc told me it could be up to a year before all the pain was gone. He was right. It will have been one year next week since my surgery, and I still have some minor residual pain in the scrotal area. Nothing major. Just a bit irritating at times. 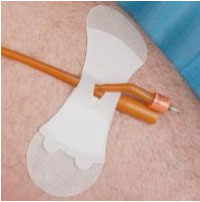 Also, you will have a transurethral catheter after the surgery (the kind that goes up the penis) for about 2 weeks. Ask you doctor(s) if you can get a securement device to stick on your leg to support the cath tube. I used the GRIP-LOK. These will protect you from pulls/tugs on the catheter, as well as maintaining the proper tension/slack between where it exits the body and attaches to your leg. You can get them for $9.95 apiece at the link in the picture to the left.

I highly recommend NOT using the standard non-stick strap, which wraps around your leg and simply stays there with some velcro on this stretchy band. It doesn’t stay up when you walk. It slides down your leg and allows the leg bag to pull the catheter tube down, pulling on the catheter and causing pain and potential damage to the urethra or bladder.

I hope this advice is helpful.