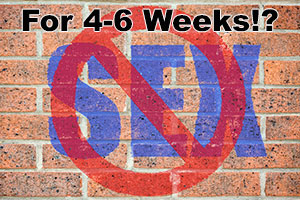 Doctors recommend that after your urethroplasty surgery, you should refrain from sex for four-to-six weeks.

As you might imagine, this can be difficult for some people. I don’t think that the reasons – at least for the first week or two – are all that mysterious. But I have gotten some questions as to why they have to wait the full recommended 4-6 weeks.

Why so long with no nookie?

While nobody ever specifically sat me down and said why, I came to some conclusions on my own. I think they make sense.
First, if you think about what got cut and needs to heal, the first thing that comes to mind is obviously the urethra. Now the erections, themselves, aren’t going to be too much of a problem, since all guys get them during sleep many times a night anyway.
However, think about what you do during sex. Not only is there an erection, but you’re pushing forward and encountering resistance back into your penis and along the urethra. That back pressure is going to put strain on the repair site on the urethra, which until several weeks go by, is only being held together by stitches. If you break one, you’re done. You broke your surgery! It isn’t really worth it to have to go through that again, in my book.
Second, the actions of sex not only push against the penis/stricture repair, but that pressure also goes against the perineum, exactly where they opened you up. And your testicles, which were clamped down so hard during surgery that they bleed internally and swell, are also gonna get squished at pushed/pulled. That takes time to heal. And again, the incision site is right behind there and is also at risk.
So for the first 3 weeks, you’d be nuts to risk opening all that up. It hasn’t healed yet. For the few weeks following that, you’re playing it safe. People heal at different rates. And after 3 weeks, you’re still at risk of doing damage to yourself that MIGHT have to be surgically fixed. Again – is it really worth the risk? You’ll have to make up your own mind on that one:).
I hope that helps!