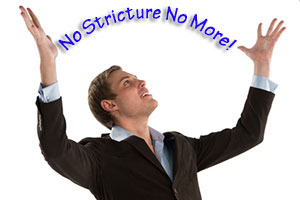 Well it’s finally done! Can I get a “hallelujah”? As I posted just before the event – I Am Having Urethroplasty Surgery Tomorrow To Fix My Urethral Stricture – I had my end-to-end urethroplasty! And the doctor (Dr. Thomas Rozanski – one of the best and most experienced in this sub-topic of urology in the country) said it was a huge success. He said the stricture was very small (amazing how much trouble of tiny bit of scar tissue can cause to a human being), and that the two healthy ends of the urethra came together easily and nicely after the part with the stricture was cut out.

Then they sent me up to my hospital room for a one-night stay. Things may have gone well in the operating room, but not so much in my overnight-stay room. I was in a lot of pain afterwards. The hospital floor where I was installed had a sudden influx of new patients and a shortage of nurses that night. Plus there were several miscommunications about medication and other SNAFUs. The result was that I couldn’t get out in front of the pain to manage or control it until about 10:30 the next morning. My assessment was that the pain was level 8 (on the 10-level scale) for about 18 hours. So it was a long and sleepless night.

The morning nurse was awesome and gave me enough pain medication that I finally felt like it was under control. My wife drove me home at 2:00 pm. I was told I could remove the dressing once there, so I did that immediately. Then I ran a wet wash cloth over (docs said not to use soap) over the surgical site, which was the perineum. Oh, and I forgot to mention that since I’d had a suprapubic catheter for the past 6 months, which was removed during the surgery. So there is also a hole there that was bandaged up. They inserted a Foley catheter up “the normal way” after the surgery.

Once I got my pants off, I could understand why the pain had been worse than it might otherwise have been. The surgeon had dressed the site with a giant thick wad of gauze, and then put tight stretchy underpants (called TENA Comfort Pants) on me. My wife said they looked like Spanks;). This was necessary to provide pressure against the wound. Things got much better after I pulled that off. After cleaning up, the doc said I could either put a light dressing over it, or just use a panty liner. My wife had plenty of those, so that’s what I did.

It was hard to inspect the area because of where it is on my body. I ended up bending over and holding a mirror between my legs to see. It was pretty comical, but very effective. There was quite a lot of bleeding and bruising in and around the scrotum. So I was told to keep an eye on that and even ice it to help the swelling. I did ice it, and it wasn’t nearly as bad as I thought it would be. Also, it did help. Apparently you don’t need to worry unless your scrotum swells to the size of a large orange. No worries on that score yet;). If citrus fruit is the standard metaphor, I was at about the tangerine or large cumquat level.

One thing that did concern me, a few hours after I got home and had walked around a lot, was that there was some blood in the urine drainage bag. Not much, but enough to turn it pink. Normally it wouldn’t concern me, but my surgeon said we wanted to make absolutely sure there was no bleeding inside the urethra at the point where they joined the healthy ends back up after cutting out the part with the stricture. This is why I could not have any anti-inflammatory meds for the first 24 hours. But I called the next morning and was told that it was almost certainly blood from the bladder, due to the new catheter being inserted. He said that if any blood had come from inside the urethra, it would have come out of the penis, around the outside of the catheter. This did not happen. Whew! (As an update from day 3 after the surgery, there has been no more blood in the urine.)

Oh yeah – the sitting down thing. They sent me home with a couple of different kinds of donut rings to sit on – some foam rings and one large inflatable one. The foam ones were OK, but after trying the inflatable one, I never went back to foam. The blow-up ring was perfect.

Keeping on the pain medication and sitting on my donut ring, I made it to bed time with relatively little pain.

I slept for about 9 hours and felt much better in the morning – 2 days after the surgery. I showered, took a pain pill and ate breakfast. The drainage bag had only clear urine in it, so no more bleeding. Everything seems great. I found that sitting in a recliner, on the blow-up donut ring, with my legs up, I could rest with almost no pain at all! This was such a relief. Getting up was awkward and painful until I discovered that placing my hands on the arm-rests, and lifting my entire body up like a gymnast on a pommel horse, then flipping the leg-rest down and standing up, was the best and most painless method for getting out of the chair.

In two weeks (not four as they originally thought!), I go in to get my catheter out, if there have been no complications. They’ll shoot a contrast solution into my bladder from the catheter. Then they’ll remove the catheter and observe the urine flow under X-ray as I pee it out. This is called a voiding cystourethrogram (VCUG). See the video below for more on this. Though it is more about doing the procedure on children, the idea is the same for big boys too. If all goes well, I’ll be fixed! I’ll go home without a catheter in me for the first time in 7 months. But that’s still 2 weeks away. Fingers crossed!