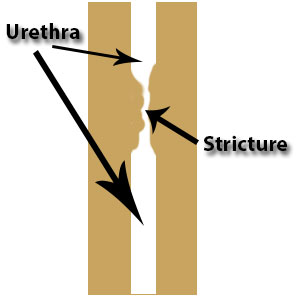 The reason I have a suprapubic catheter is due to my stricture of the urethra. I know, I didn’t know what that meant either. So you can be one step ahead of me by knowing that a stricture of the urethra is basically scar tissue inside the urethra that grows large enough to prevent you from going “number 1.” See the picture to the left for a unisex visual of a stricture) People usually don’t know what caused their stricture. It can be any trauma to the area from the past several years. that could be getting schwacked in the nads (guys), or damage done by a catheter inserted during surgery, any number of things. Sometimes it’s venereal disease. Anyway, here is the story of how I found out I had one of these.

My primary care doctor diagnosed me 6 months earlier with an enlarged prostate, medically called benign prostate hyperplasia. Besides thinking I was several years too young for that, I just accepted it and took the medication (terazocin). But my pee stream was getting weaker and weaker until finally I got a consult to visit the urologist. One week before the urology appointment, I woke up one day and could not pee at all. so off to the emergency room I went.

What followed was a period of time I will forever remember as “the day the 10 on my pain scale was readjusted – by a lot.” Typically, an ER nurse would encounter little or no resistance when inserting a catheter up through a male patient’s “wee-wee”. And when they do, it’s usually because the patient got nervous and tensed up, squeezing the sphincter and inhibiting the insertion of the tube. Still, that is usually overcome by taking a few extra seconds for the patient to relax, and then insertion can continue. So when my nurse couldn’t push the tube in any more, he assumed I was just tense. And boy was I ever! It hurt like no pain I’ve ever had. My screams told everyone around that this was the case.

Well, the nurse simply said to relax as he continued to push, and I continued to scream. After a minute or two of this, he gave up and said he’d leave for a few minutes to give me time to relax. Yeah, right! Well after about 15 minutes, a different nurse came in. She said she would definitely get it in (was this a game to them?). I told her I could not go through that again without something for the pain, and wasn’t there some anesthetic gel or something they could apply. She said something to the effect of “well, do you want us to poke a hole in your belly and drain it that way?” in a VERY sarcastic tone of voice. If I had only known then that THAT is exactly what was to happen, I might have been able to avoid more searing pain. Anyway, she said “here we go,” and proceeded to try again, just like the first nurse, with no anesthetic. It hurt worse than the first time. She screamed at me to relax, and shouted that women do this all the time in child brith – “just pant!” Oh my god, what?! If it hadn’t been for the doctor walking in at that exact time, and telling her not to push it if she couldn’t get it in, I don’t know how much longer she would have pushed and shoved.

The problem seemed to be that neither nurse even considered that it could be a stricture of the urethra, since they are much less common than the trouble caused by nervous patients clamping down.

Shortly after she stopped the second effort, the nurse left and I was alone in this little room for some time, whimpering like a baby. After about 30 minutes, some doctors from Urology arrived. And I told them I had been in so much pain that I don’t know how I could endure any more without some sort of anesthetic. Once of the docs said “you mean like THIS?” He held up a tube of Lidocaine gel. Well where the heck was that when the nurses were trying to shove this thing in me? At the very least, the second nurse could have done, after I had been through so much pain already. Anyway, it was not a surprise that the urology folks couldn’t get it in either, but at least there was not so much pain this time. And they stopped after just about 10-15 seconds, realizing the strong possibility of a urethral stricture.

So I was discharged from the ER and walked up to the urology clinic where they gave me more lidocaine gel, and then put a camera into my urethra – yes, using the normal route (if you’re a guy, I’ll bet you’re cringing in a very predictable way right now:)). What they saw was a misshapen mass of scar tissue completely obstructing the path to my bladder. The doc said the damage done by the ER nurses trying to shove the catheter in had obliterated the stricture, basically closing off any opening there may have been. Wow.

So the next step was to have dye injected into my urethra under an x-ray to see if at least liquid could get through. Nope. There was no way of getting a catheter into me the normal way – through the urethra. The only other option was to have a suprapubic catheter inserted. See our post on those in the article What Is A Suprapubic Catheter? So they admitted me to the hospital and put the thing inside me that night. Ironically, there was literally no pain involved in that at all, which was mostly due to the Fentanyl they fed me through the IV. OK, it was entirely due to that. But the application of even a little pain medication can sure makes an amazing difference.

Now interestingly enough, considering that it is really just a bunch of scar tissue, a stricture of the urethra is, according to my urologist, about the hardest thing to fix next to prostate cancer. They have to up-size the catheter monthly at least 3 times (the first one was a small 10 French size – see our post on catheter gauges Primer On Urinary Catheters And Catheter Gauges). Once the catheter is large (wide) enough, they can stick a camera down through the bladder as well as one up the other way to get the most accurate picture possible of the stricture. Only then can they determine which of the many types of treatment will be best for me.

This is a long-term process – possibly lasting up to a year. So as I go through each day in my new reality, I will pass along any tips I pick up or devise via this website. That’s the reason I started it. Might as well wring some good out of this if I can, right?

If you have any questions about strictures, or what it’s like to go through this, please leave a comment below.