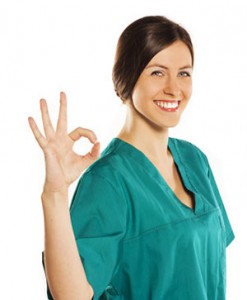 I am in shock – the good kind. They did my monthly suprapubic catheter change today and there was virtually no pain! The reason this is so amazing to me is that all my previous changes, except the one done as part of my diagnostic surgery (See my post about that procedure – Results Of My Combined Antegrade And Retrograde Urethrogram) when I was under anesthesia (spinal), have been agonizingly painful.

In-dwelling catheters must be changed every month due to the risk of urinary tract infection. And in my case, I had to go at least 3 months on bladder-rest before they could do the diagnostic surgery. So that meant 3 catheter changes.

The first change was after only a month of having an SP catheter, so two things needed to happen. The catheter size needed to be up-sized from the initial 10fr (“ten-french”) to 14fr. So that involved cutting a larger hole in my gut. The doctor thought THAT would be the only pain. Boy was he wrong. It was a horror-show of pain. My bladder started spasming and it felt like I was birthing an alien. We’re still not sure why that was so painful. But flash-forward one month. The second thing that needed to happen was that they needed to insert a guide wire into my bladder through the SP hole to make sure it didn’t close up, which can happen pretty quickly – a matter of minutes if the hole is only a month old like mine.

For my second SP catheter change, no up-sizing was needed, so the doctor (a different one, who had no memory of all the pain and unpleasantness of before) said it should be painless. But as soon as he dropped the guide wire into my bladder the pain shot through the roof again. And again, there was screaming. This time things went much faster, but still there was a LOT more pain than anyone (except my wife and I) thought there would be. Oh, and in case you’re wondering, the urology clinic is not allowed to administer an IV or any pain meds in their procedure rooms. For that, I would have to have things done in the operating room. Blah, blah, flibbedy-blah and lots of administrative reasons why they could not sedate me. But, the doc said, they COULD five me a shot or two of local anesthesia through the skin and muscle around the hole. I guess he felt like that would make up for not being able to sedate me or give me IV pain meds. But the darned local shot, of which he gave me 3, were REALLY painful. And that area isn’t even where the previous pain had come from. It was INSIDE the bladder that hurt. Sigh. As it turned out, the pain from the shots is what bothered me for days afterward. Gah!

The third change a month later, as I mentioned, was done during a surgery in an O.R. So I didn’t feel it at all. But I was definitely dreading today, the day of my next cath-change.

It didn’t seem to start out well, since they said no doctors would be doing my procedure. And they also asked if I minded if they had a nurse trainee to it. I really did not have a choice. What? No doctor? Aren’t doctors better than nurses? As it turned out they are not. At least in this instance. The nurses were AMAZING.  Almost before I knew it – even as I watched – the trainee had sucked out the saline from the Foley balloon (no, not like that sounded – he used a syringe;)), and slid the old catheter out like it was nothing. And I felt nothing (quick “A Chorus Line” reference there; – sorry).

Then we (my wonderful wife always comes with me ad threatens or cajoles on my behalf) asked “didn’t they have to use a guide-wire to prevent the SP hole from closing?” They all very confidently said “No we don’t. It would take like an hour to close up.” Really? What happened to all the warnings that the hole can close in a matter of seconds or minutes? Still though, this was good news. The guide wire is the thing that caused so much pain in the previous two changes. And no wonder. These guide wires look a lot like picture-hanging wire to me. And the tip is pretty poke-y. I don’t know why they don’t make these things with a more rounded so it doesn’t stick the bladder wall. So I was very happy not to need one. Now I just wonder why I needed one the previous month!

Anyway, so the trainee nurse simply sterilized the area and fed the new catheter in. I felt a little pinch of pain when it made contact. But immediately after that, the nurses all reported that it was done (they could see urine flow from it). Wow!!!!! Did I mention WOW!? As in holy crap!?

Now they only had to inject the saline to inflate the balloon on the Foley, which I didn’t feel at all. And I was finished!

I do NOT like pain. I know, few people do. But I am particularly sensitive to it. I’m a pain weenie. So I had been stressing out about the latest changed for days. And because of three nurses doing a job MUCH better than any previous doctor managed to do, all that stress was for nothing.

I already had a high regard for nurses. But now I put them on the same level as doctors (or maybe even higher) on a whole lot of factors.

So I’m good for another month now, and suffered a lot less pain because of some pretty smart and caring nurses.

Next month I’ll have my urethroplasty (end-to-end anastomosis) to fix my urethral stricture, and they’ll move my catheter to the “traditional” location for 4 weeks. I hope they let nurses do all my post-op catheter stuff.