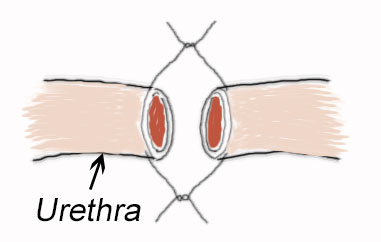 This is it! Six months of wearing a suprapubic catheter (see my post – What Is A Suprapubic Catheter? for more on that) has led to this. I go under the knife tomorrow to repair a urethral stricture (see my post – My Stricure Of The Urethra for what that means). I will post here after it is done and let everyone know how it went.

The reason I had to wait so long is mainly that – according to my doctors – one a urethral stricture is confirmed, its location and size need to be very accurately pinpointed in order to ensure the best and longest-lasting outcome (“for the rest of my life” is what I’m hoping for!). So the bladder needs to rest for 3 months before the most accurate information about the stricture can be obtained.

There are several places along the urethra where the stricture can set up shop. For men, who have a much longer urethra than women, the available locations are many. Is it in the penis? If so, what part – front or further back? If not in the penis, then it could be anywhere along the length or urethra that leads from the base of the penis, through the prostate, all the way to the opening of the bladder.

The location and size determine what kind of surgery will be selected. In 2013, a vast majority of strictures are treated via urethroplasty, which is some form of cutting and rebuilding of the urethra. And there are several very different types of urethroplasty. I described them all in my article, The Treatments For Stricture Of The Urethra, if you care to review them. They vary from the least invasive – end-to-end anastomosis – to the very invasive and complex 2-stage version.

Even within each type, there is a lot of variation. For example, end-to-end anastomosis (see the picture above for the basic idea) has many different variations, from how to access the stricture (cut open the penis or approach from the perineum. BTW, they used the perineal approach on my surgery), to how the excision is performed all the way to how it is re-attached. Then there is the decision of whether or not to augment the repair with a buccal graft (taken from inside the cheek), which cannot really be made until the surgeon has you open and knows how much of the urethra has to be cut out.

So because of the many moving parts and uncertainties involved, it is imperative to know as much as possible about the stricture before trying to fix it.

Letting the bladder rest for 3 months helps to keep it empty, which prevents it from constantly pushing urine across the stricture, which causes not only pain, but inflammation in the area of the stricture. Letting it be allows for a much more accurate picture when they scope you to determine size and location.

Then after that, you have to have the surgery scheduled, which usually takes a few months. So here I am six months in and about to be repaired.

Like I said, I’ll let you know how it went when it’s done. Wish me luck!

ps – Of course after it’s done, there are four more weeks of catheter time during recovery. Yay!