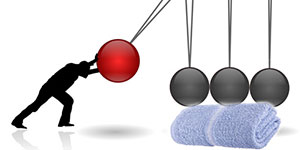 I just talked to my surgeon today about some pain I still have 4 and a half weeks after my urethroplasty surgery (see my post I Am Having Urethroplasty Surgery Tomorrow To Fix My Urethral Stricture), which was of the “end-to-end anastomosis” type. It was an VERY informative phone call. If you have had this type of surgery, and are still having pain in the scrotum and testicles, this may help you.

I posted a few days ago (1 Week After The Voiding Cystourethrogram (VCUG)) that though the surgery was incredibly successful, my recovery seemed to be taking longer than I expected. The surgery uses a perineal approach, which means they make the incision in the perineum, the area between the scrotum and the anus (in males, obviously). So it isn’t really possible to sit down normally after the surgery for several weeks – sometimes a month or two. That is due to the trauma above the incision point, which involves a lot of different kind of tissue (blood vessels, muscle, various plumbing-type tubes, the corpora cavernosa, the corpus spongiosum, etc.). So the only way to sit down is without putting any pressure on the area. I was given an inflatable donut-shaped pillow when I left the hospital, and have been using that ever since, in order to sit without pain.

The question I asked my surgeon

I knew it might take a couple of months before it would feel normal to sit on a hard surface. But I was not warned about lingering swelling and pain in the scrotum and testicles. And after 4 weeks, I still had plenty. I wanted to know if this was in the range of “normal,” or if it was definitely very unexpected. So I put in a call to my surgeon to ask about it. He’s a busy guy, so it took a few days, but I got the call today. Here is what I found out.

He said it is normal to still feel swelling and discomfort in the entire area, including the scrotum and its contents, at the 4 or 5 week point and even beyond (even possibly up to a year!). That was a relief. He also said – and this is the really interesting part – that the pain in the scrotum and testicles can be prolonged or made worse if the scrotum is allowed to dangle or hang in space too much. Hmm. My follow-up question was, “I’ve been sitting on an inflatable donut pillow. Could that be the reason for the pain I’ve been especially feeling down there?” He said, “Actually you should be doing the opposite. Sitting on the donut pillow allows the scrotum to hang loose and unsupported. What you should do is sit in such a way that you can put a rolled up towel (or something similar that is soft but supportive) under your scrotum when you sit down. And make sure you wear a jock-strap or something else that firmly supports the scrotum when you go out for a walk.”

“I’ve been sitting on an inflatable donut pillow. Could that be the reason for the pain I’ve been especially feeling down there?” He said, “Actually you should be doing the opposite.”

O-M-G! It makes so much sense! And it’s so simple. Jeez, it is so often the little tid-bits of knowledge like this (or rather, the lack of them) that can wreak havoc with our lives. So I went straight to the computer to share this with everyone who might be going through this (urethroplasty), or who will be going through it.

Not only does it make me feel reassured to know it is normal to still be experiencing pain at the 4-5 week point after surgery, it was a huge eye-opener to understand the cause of some continuing specific pain that just seemed never to improve. I was doing it to myself by sitting on the donut-shaped pillow without also making sure the scrotum was not allowed to hang/dangle, which is exactly what was happening when I was sitting on that pillow every day. Wow!

OK. So here it is. If you have (or are about to have) had urethroplasty using a perineal approach, there will be tons of swelling and bruising for the first two weeks. There will also be discomfort in the entire area for weeks after that. HOWEVER, you can speed up the healing process in your scrotum and/or testicles (or at least prevent prolonging it) by making sure the scrotum spends a very minimum amount of time unsupported. If you use a donut-pillow to sit on, make sure you also use a rolled up towel or something under the scrotum to support it.

And yup. As I sit here at the computer, there is a rolled up towel down there. And there will be until the pain is gone.

I hope that helps some folks! I’ll give another update in a few days to report how well this worked.

[UPDATE at the 15-week point: It has been several weeks since I wrote this post – about 10 weeks later, actually. Unfortunately, the pain has not abated by much.  At my 2nd uroflow appointment (see Uroflow Test 10 Weeks Post-Surgery), my surgeon did a complete digital exam and proclaimed there was nothing unusual. So he couldn’t explain why I was in pain. I just keep remembering what Dr. Larson said about the pain possibly lasting for as long as a year.

There is another thing that occurred during the time leading up to the surgery. I developed an inguinal hernia. These hernias sometimes result in parts of the intestine descending into the scrotum. This is a kind of inguinal hernia called a scrotal hernia. During my pre-op appointment for the repair of this hernia, I mentioned my scrotal pain. That resulted in their sending me to get a scrotal ultrasound. I won’t know the results of that until tomorrow. But I’m hoping all the pain I’ve been feeling will have something to do with the hernia, and the surgery to fix it will also mean the end of that pain. We shall see.

[UPDATE from the results of the scrotal ultrasound] I got the results from the ultrasound on the scrotum and testicles today, and it didn’t shed a ton of light on the issue. The good news is that they now have tactile and photographic proof that there is nothing wrong in there. They DID say that the tissue (fat and/or intestines) protruding from the hernia is descending into my scrotum to some degree. But that is probably not the cause of the pain I’ve been having. I knew it was a bit too hopeful. Oh well. For more, see the next post on this topic here – Update After Scrotal Ultrasound.