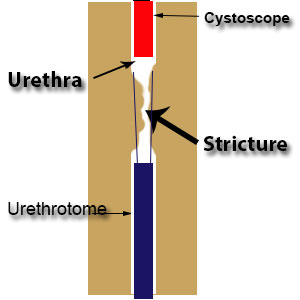 I just read about a different sort of treatment for treating a urethral stricture that I hope-to-the-heavens my urology docs can do. It’s called antegrade-retrograde urethrotomy, or ARUT, for short. I wrote about the more common type of urethrotomy in my recent post, DVIU Treatment For Urethral Stricture, which basically means they can do the cutting, etc. through a scope without having to slice you open.

With ARUT, they can come at a urethral stricture (in certain cases) from both the top and the bottom with scopes. Obviously this is easier for patients (like me!) who have a suprapubic catheter (see What Is A Suprapubic Catheter? for a review on what that is). The abstract found here – https://www.ncbi.nlm.nih.gov/pubmed/7703996 – contains a phrase which truly caught my eye and interest immediately, and that was “…open urethroplasty can be avoided by performing combined antegrade-retrograde urethrotomy (ARUT).”

I have not written much about urethroplasty, but all you need to know is that they slice open a guy’s “member” and do lots of cutting and/or other stuff in that way. If I can avoid that, I’ll be very happy.

Unfortunately, the stats to date don’t show a very high success rate for stricture patients undergoing standard urethrotomy. Numbers vary, but it comes down to less than half, meaning that there is at best a 50/50 chance the stricture will come back if you had it fixed via urethrectomy. But the ARUT technique looks more promising. The primary success rate is only 25% (in this study), but for the 75% that needed retreatment, another ARUT yielded a 65% success rate. The authors of the study recommend ARUT in patients with severe strictures.

So far in my journey, I don’t know if they describe my stricture as severe or not. But one thing is certain, it’s pretty much a complete blockage somewhere along the path. And if my only choices are:

Have open urethroplasty yielding 80-90 percent long-term success rate, or
Have an antegrade-retrograde urethrotomy with its 25% initial success followed by 65% success if they have to do it again…

I will take the latter. Two relatively minor scope-type procedures versus the gruesome urethroplasty sounds pretty good to me.

I will quality that last statement by saying that I would be open (no pun intended) to the kind or urethroplasty (called “excision and primary anastomosis”) where all they do is snip out the part of the urethra where the stricture is and join the two ends. That’s mainly because it does not require a graft from inside your freakin’ mouth (usually from the cheek) like the other kinds of urethroplasty. Yikes! I’m a singer and voice-over actor. I don’t want them cutting out the insides of my mouth.

Anyway, I thought the ARUT was a very interesting and promising alternative to the more common treatments, and that if you have a stricture, you’d want to know about it. So here it is.

If you’ve had any kind of stricture repair done, please leave a comment below to help those of us who are still waiting for ours understand what we might be in for.